Bringing Existing Fans in from the Cold.

Nowadays, brands see a presence on social media as more of a necessity than an opportunity. This, wasn’t the case for Strongbow Dark Fruit, their page was already on social — they just didn’t know it yet!

Stereotypically a Dark Fruit fan wears a bucket hat, loves Oasis and thinks Festival season is the best time of year. End of. This stereotype saw the birth of a ‘Dark Fruit Twitter’ persona.

Alongside the launch of two brand new channels on Instagram and Twitter, we also took an existing page – ‘Dark Fruit Appreciation Society’ – on Facebook, with over 18,000 fans and turned it into an official branded channel.

Our goal was to engage a community. The Strongbow Dark Fruit community is very much present on social. We needed to bring these fans onto a branded channel, and steer clear of the negative conversation Dark Fruit got on social.

To engage with an already existing community and blend in with the crowd, we aren’t afraid to laugh at the brand and their audience (a bit), playing up to the stereotypes they are known for.

In order to find Strongbow Dark Fruit’s audience on social, we did some heavy social listening, and developed a fully formed reactive strategy. This was not about finding the comments that were praising the brand but finding the people that fitted the ‘Dark Fruit Twitter’ persona and engaging with them.

There are so many brands on social who are posting content without actually listening to what is going on outside of that world. With Strongbow Dark Fruit, we took an engaged audience and served them content that was actually of interest to them.

The initial campaign had 16.7m+ impressions across all three social channels a 53% follower growth on Facebook and 32K more followers across the board. 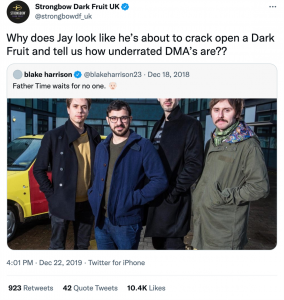 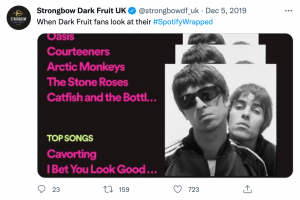 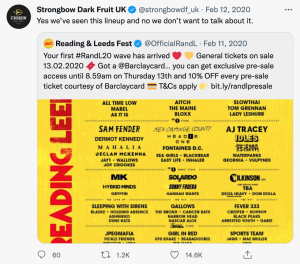