Follicular Lymphoma. Ever heard of it? Don’t worry – most people hadn’t either…but more than 200,000 people suffer with the disease globally and there is currently no cure….

FL is a cancer that is not often discussed or talked about. Consequently, FL is underfunded in terms of research and clinical trials – even though medical experts believe there is a strong likelihood it can be cured. Nicola Mendelsohn, EMEA VP for Facebook, was diagnosed with Follicular Lymphoma in 2016 and has been living with the cancer ever since. She was determined to raise the profile of this cancer and decided to launch FLF – a charity dedicated to finding a cure.

We needed to raise awareness of the cancer by driving the first-ever global conversation about Follicular Lymphoma, placing it firmly on the public agenda and helping raise funds for the charity. This was a campaign with big ambitions but small budget. We (and all partners!) undertook the work on a pro-bono basis.

• Influence – drive a global conversation about Follicular Lymphoma to put both the cancer and the charity firmly on the map.

We were tasked to reach 100M people for the launch – which for a charity and disease no one had heard of was a challenge to say the least!

To put Follicular Lymphoma on the map, we had to show that this was an important cause to millions of people in order to get people to donate money and support the cause. There are so many worthwhile and important charities that are well established, so we needed to stand out.

We had to create something disruptive to create a groundswell of public opinion and social conversation to launch the foundation.

The campaign would be used to then visit key stakeholders (Charitable foundations, cancer specialists, donors) to show that people care about FL and that they want to find a cure.

We recognised that to really unlock a large-scale conversation, we would need a creative approach that resonated with a millennial audience who would spread our message and deliver the scale we required.

So, what happened next:

Our response included core components including some funky tech, influencers, partnerships and media, but to start a hero visual of the campaign was developed, featuring a striking image of Nicola Mendelsohn, EMEA VP for Facebook, who is living with Follicular Lymphoma.

The stark image (shot in colour) had contrasting purple lymph nodes on the outside of Nicola’s face to ‘make this invisible disease, visible’. World renowned photographer, Rankin shot the hero image of Nicola, as well as celebrities Katherine Jenkins and Tracey Ullman and influencer Julius Dein.

As a new charity, FLF had no audience and no followers. We needed a creative way of getting people to share the message for us… and what better than the simple selfie?! We created an Instagram and Facebook filter so people could recreate the lead visual for themselves and share it with their followers. The AR filter climbed up people’s faces creating a striking Instagram moment that could be shared and included our message #CureFL.

We worked with a large range of global influencer agencies to secure many of their high value, top tier influencers and got them to use the #CureFL filter and post it on their pages.

We wanted Instagram and Facebook to be flooded with visuals linking back to the campaign. Whalar, CAA, Tribe and Gleam all supported the campaign by providing free access to influencers.

We approached and secured the support of some of the leading social publishing companies to help drive our message. But we took a different approach. We didn’t tell them what we wanted them to do – we set them a tight creative brief and asked them to respond in a way that was right for their audience. We wanted a diverse range of content around the launch.

#CureFL became a global conversation on the launch day. We reached over 186 million people in the first week of the campaign.

We saw over 270 pieces of social media coverage appearing from partners, publishers and influencers.

We saw an 8% national increase in familiarity of Follicular Lymphoma in just one day (from 3% to 11%). For a disease with minimal recognition, this was a major increase.

19% of all adults interviewed claimed to have recently seen information about FLF, the day after the launch.

A total of 37 Facebook fundraisers have been set up since we launched, with £200,000 raised and counting.

But more importantly… made an invisible cancer visible. 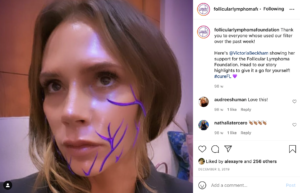