As we all know, a year later than planned, Euro 2020 took place this summer. It presented the perfect opportunity for Captain Morgan to align themselves to not only a huge cultural moment but a massive consumption occasion. We knew consumers tended to lean towards beer for these types of events but saw this as a chance for us to get football fans th(dr)inking about Captain Morgan.

We took a universally appealing dish, loaded fries, and created 16 different loaded toppings to represent 16 different nations competing in the Euros, leveraging Captain Morgan’s food and drinks credentials. Each of the loaded fries was also paired with a Captain Morgan serve, allowing us to highlight how versatile the drink also is. Drawing attention to the many ways in which Captain can be mixed and enjoyed. We then pitted them against one another in knockout-style tournament via polls across social, asking our audience to vote for their favourite eventually crowning Italy as the winner (yes it still hurts).

Content not only went live on global channels but was also seeded out to the markets who used the assets we created to encourage their following to get involved and vote for their nations fries. The Final of the Champion-Chip ended up reflecting the actual final with England’s English Breakfast Fries taking on Italy’s Parmigiana Fries and received over 155,000 organic votes, outperforming content from official sponsors of the Euros and posts with paid support.

Throughout the campaign, to help us further drive engagement and awareness, we also engaged with some of the biggest football accounts in the game including football transfer guru Fabrizio Romano and 5x Premier League Champion, Patrice Evra. 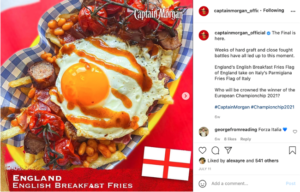 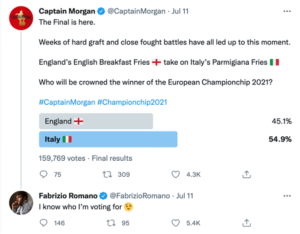 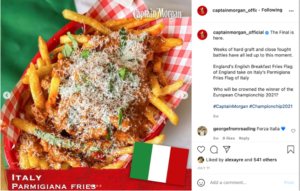